When director, Jim Wynorski asked me to score his film, SHARKANSAS WOMAN’S PRISON MASSACRE 3 things went through my mind. 1) Will there be women in the film? 2) Will there be a shark in the film? 3) Will there be a budget to write the music for the film? Of course this is a stupid question. I’ve worked with Jim for more years than I care to mention… so I know the answer already: YES, YES, NO. As is usually the case on low budget films the money would be spent on women and visual effects. Not music. Yet, with the most popular shark film of all time, JAWS having a signature theme and score I was determined to give Jim his ‘shark’ vibe, make it distinctive, and earn my music composition fee on royalties through BMI, once the film aired on broadcast television. 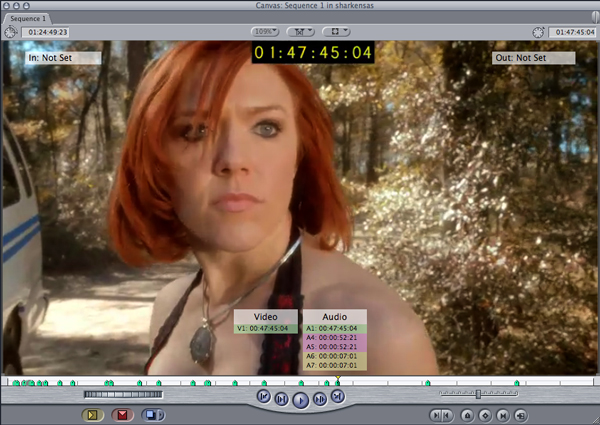 So I dipped into my vast FearlessMediaMusic.com music library for most of the underscore, but also composed a new theme for the shark and some of the other shenanigans going on in the movie. Because I have access to all my original composing files in Logic 9, I even customized some of the background score!

The editorial result is pictured in the graphic above. And as promised the three things you’ll love about SHARKANSAS are:

I’m looking forward to the final mix for the movie. Patrick Giraudi… do us good!!!